[03a] Friedrich Wilhelm I, the Great Elector Statue #2, Berlin, Germany [side] 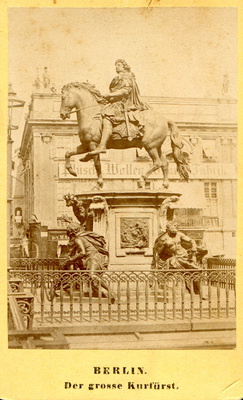 The statue is of Friedrich Wilhelm the Great Elector (1620-1688), who set the stage for Friedrich Wilhelm I to turn Prussia into a monarchy and become its king. He funded the creation of the statue. The title on the front of the CdV, “Der Grosse Kurfürst”, is the German title of the Great Elector, translating roughly to the same thing. The statue currently stands in front of the Charlottenburg Palace in Berlin, Germany (but was originally planned to be on a bridge across the Spree river). The palace was built by Friedrich I (1657-1713) and was completed by Andreas Schlüter, the same artist who created the statue. The palace served as an administrative center for the Prussian monarchy until 1888, by which time it had become the German monarchy. The palace and statue both heavily draw upon a Baroque style of sculpting. The statue itself is on a typical Baroque pedestal, with intricate carvings on the sides and flairs on the corners. It shows the Great Elector on horseback, looking over the plaza while dressed in Roman clothing which was common in the rococo style. Along the base of the statue, there are four men in chains looking up at the Great Elector, signifying the enemies he conquered while commanding the Prussian armies. The military was Prussia’s greatest accomplishment and source of pride, so it was important to represent their victories within this statue.

Open-source collection of photos of the statue and other Schlüter works:

This work is licensed under a Creative Commons Attribution-NonCommercial 4.0 International License