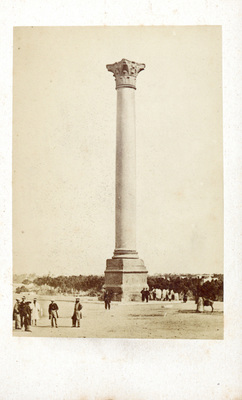 A carte-de-viste historical photograph of Pompey’s Pillar, a Roman triumphal column in Alexandria Egypt. The column was set up in honor of the Roman Emperor Diocletian between 298-302 AD after he besieged the city for eight months and spared what remained of it from looting. During the Middle Ages, European Crusaders misidentified Diocletian’s Column as Pompey’s Pillar, believing it to be for Pompey who was assassinated in Egypt after fleeing from Julius Caesar’s forces. They believed his ashes sat in a pot at the top.

Name and location on the back of the C-D-V (Pompey’s Pillar, Alexandria). About 15 people are shown around the front of the column. The capital of the column is of Corinthian style, while the column itself is monolithic. There appears to be some sort of markings at the part of the base closest to the foreground. There are some buildings in the background of the photo. The column was erected in the ruins of the Temple of Serapis, an important holy site for both the Egyptians, and Romans.

This work is licensed under a Creative Commons Attribution-NonCommercial 4.0 International License