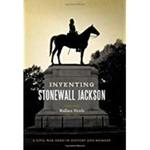 Historians' attempts to understand legendary Confederate General Thomas J. "Stonewall" Jackson have been uneven at best and often contentious. As an occasionally eccentric and elusive college professor before the Civil War, Jackson died midway through the conflict, leaving behind no memoirs and relatively few surviving letters or documents. In Inventing Stonewall Jackson, Wallace Hettle offers an innovative and distinctive approach to interpreting the famed general by examining the lives and agendas of those authors who shaped our current understanding Stonewall.