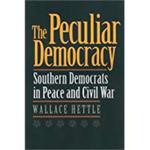 The Peculiar Democracy: Southern Democrats in Peace and Civil War

Too often, Wallace Hettle points out, studies of politics in the nineteenth-century South reinforce a view of the Democratic Party that is frozen in time on the eve of Fort Sumter―a deceptively high point of white racial solidarity. Avoiding such a "Civil War synthesis," The Peculiar Democracy illuminates the link between the Jacksonian political culture that dominated antebellum debate and the notorious infighting of the Confederacy. Hettle shows that war was the greatest test of populist Democratic Party rhetoric that emphasized the shared interests of white men, slaveholder and non-slaveholder alike.