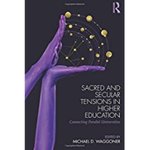 Both sacred and secular worldviews have long held a place in U.S. higher education, although non-religious perspectives have been privileged in most institutions in the modern era. Sacred and Secular Tensions in Higher Education illustrates the importance of cultivating multiple worldviews at public, private, and faith-based colleges and universities in the interest of academic freedom, and intellectual and moral dialogue. Contributors to this edited collection argue that sacred perspectives are as integral to contemporary higher education in the United States as the more dominant secular perspectives. The debates and issues addressed in this book attempt to rebalance the dialogue and place an emphasis on pluralism, rather than declare victory of one paradigm over the other. Student affairs administrators, higher education and religious studies faculty, and campus ministers and chaplains will benefit from better understanding the interplay of these sometimes competing and sometimes complementary ideas on campus, and the impact of the debate on the lives of faculty, students, and staff. -- Provided by publisher