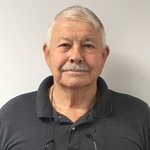 Leigh Rekow has spent his whole life in the Postville area, attending Postville High School and making a career as a farmer between Postville and Luana. After his children took over the farm, Leigh spent time in the Peace Corps and traveling overseas using his agricultural experiences to help communities in Africa and Russia. Leigh has had a long political career. He spent one term as a state representative, fourteen years as a city council member, and at the time of the interview was serving as Mayor of Postville. In the interview, Leigh discusses his experiences with the above mentioned positions as well as the aftermath of the May12th, 2008 ICE raid, how the media has portrayed Postville, and his hopes for the future and the new owners of the processing plant Agristar.

The Community Voices: Postville Oral History Project sought to capture the remembered past of those who experienced the “Postville story,” that is, the social context leading up to, including, and following the ICE immigration raid that occurred on May 12th, 2008. The Interviews available here showcase the unique memories of 16 interviewees living and working in or near Postville. The interviews will leave listeners with a sense of how a small town in rural Iowa has dealt with and continues to deal with vast demographic change and the aftermath of an ICE raid that threw Postville into the national conversation on immigration reform.

This work is licensed under a Creative Commons Attribution-Noncommercial-No Derivative Works 3.0 License.