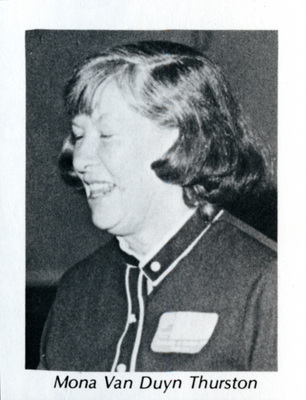 Mona Van Duyn graduated from Iowa State Teachers College (ISTC) in 1942 with three majors: English, Speech, and French. More importantly, she began to take herself seriously as a poet at ISTC. She often made the three-mile walk west of Cedar Falls to visit poet James Hearst. After college, and a Master's Degree from the University of Iowa, Van Duyn went on to teach at the University of Louisville, and Washington University in St. Louis. She has won every major U.S. poetry prize, including the National Book Award and the Pulitzer. UNI awarded her an Honorary Doctor of Literature Degree in 1991. In 1992, she was named the Poet Laureate Consultant to the Library of Congress.