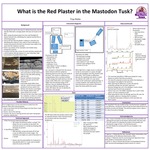 What is the Red Plaster in the Mastodon Tusk?

During the first visit to the tusk, Dr. Sebree found the crack that had been filled with a strange plaster that was not known at the time.

After seeing the plaster glow from the small flashlight Dr. Sebree had with him, identifying this material seemed like an interesting project.

Due to the fact that the plasterâ€™s makeup is unknown, but identifying the material it was made of, future attempts to restore and preserve the fossil can be done more safely in the event that the material is harmful

In section 4 of the tusk, a series of cracks had been packed with a red-ish plaster that was opaque to x-rays indicating a high concentration of possible heavy metals.

If the material is a heavy metal, extra precautions would need to be taken to stay safe while working with the tusk.

• Popular methods of preserving fossils in the past use harmful materials.[2]

• This includes plasters that use heavy metals such as lead.

• The tusk has also never been tested for a radiation, so there is a chance of the material being radioactive.

The sample was unable to be tested for radioactivity, however.

Hickie, Tray, "What is the Red Plaster in the Mastodon Tusk?" (2017). Mastodon Tusk Project Posters. 4.
https://scholarworks.uni.edu/mastodon_posters/4