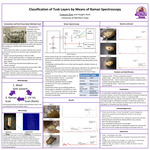 Classification of Tusk Layers by Means of Raman Spectroscopy

The American Mastodon tusk was donated to the University of Northern Iowa, and Dr. J. Cable took the lead on preserving it for museum display at UNI. Dr. Cable’s notes stated that it would be possible to preserve the entire tusk, because the outside was “covered with a hard enamel-like substance”. Some notes were taken as to what materials were used to preserve the tusk early on, but their exact composition was not noted.