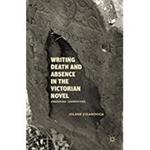 Writing Death and Absence in the Victorian Novel: Engraved Narratives

Writing Death and Absence in the Victorian Novel: Engraved Narratives asks its reader: Why do Charlotte Brontë, Charles Dickens, and Wilkie Collins see the narrative act as a series of textual murders and resurrections? What does it mean to have an enigmatic ending? And what happens when the mortality of a character is left in our hands? Beginning with an exploration of narrative deferment, suspended mourning, and incomplete burials, Jolene Zigarovich uniquely argues that the missing body plot dramatizes the desire for cultural stability and religious certainty, and that the epitaph becomes the narrative model for rhetorical deaths. Drawing from theorists such as Jacques Derrida, Maurice Blanchot, and Paul de Man, this study maintains that the narrating of death was important to the understanding of absence, separation, and displacement in an increasingly industrial and destabilizing culture.

Department of Languages and Literatures